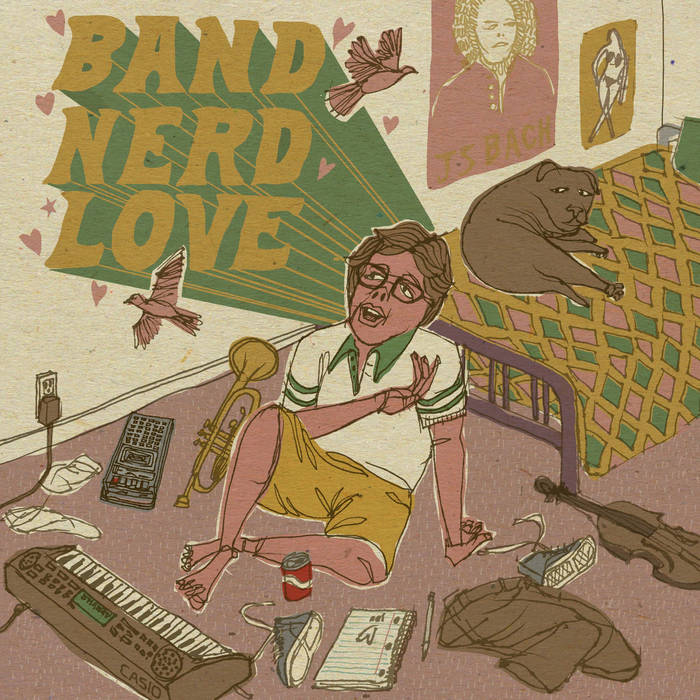 "Band Nerd Love" is the name I have chosen for a love letter cassette recorded sometime in 1985 that I found at a thrift store in Las Vegas, NV in 2006. A clip from this recording also appears on my album "If I Were Me" and is the subject of my song of the same name. In some sense, I consider this a side-project or offshoot of that record... and it is essential listening for anyone wanting to get deeper in to the mind of Band Nerd.

It was discovered by chance, but not by accident. I began collecting found sound in the form of cassette tapes, micro cassettes, 8-Tracks, and home-recorded records, around 2002. The types of recordings that I most enjoy are those clearly recorded in an unaffected manner by a person who reveals something about themselves. The best tapes have a natural story, message, theme, arc, or some other intentional or unintentional structure. These are often recordings (accidental or purposeful) of telephone conversations, the audio of road trips, tape-letters, and children or people with mental disabilities, but they take many other forms. With the exception of mix-tapes, the common home-recordings are the bad ones: church ceremonies and large social events. The hard surfaces and cavernous architecture of churches and rec-rooms prove the worst possible environments for amateur recording. The documenting of parties and other social functions yields a muddy, impenetrable din. But when a recording is good, it's often great.

For more on this, please check out my collection of found sound: "Eavesdrop: a wealth of found sound" which was birthed on July, 1st, 2006. The CD features 40 clips (almost a full 80 minutes) of found sound from home-recorded media and is still available through Bandcamp as a CD or a digital-sampler version. Eavesdrop is a collection of folk art, from what I call “the Golden Age (1965-1986)” of personal recording.In some cases, a cassette was so good that I was unable to select a representative track for inclusion on "Eavesdrop." Or in this case, I became attached to the tape as a whole after repeated listens, and couldn’t really imagine just sharing one bit of it with people.

This love letter cassette is the work of a young man named Martin, who is about to graduate from high school. Martin’s tape-letter is for a girl he claims to be in love with named Elizabeth (though he calls her “Lizben”) and was recorded the day before Lizben is supposed to come over for “the last time.” Lizben is moving with her family, while Martin is going away to college. As Martin says, “you’ve gotta go with your family, and I’ve gotta get an education.” This sounds like the set up for a really sweet goodbye. It’s not.

Martin is a know-it-all music nerd who loves to hear himself talk. He is pathetic, fanciful, annoying, and expresses himself best in clichés. Martin’s tape is the documentation of two unpleasant eventualities of teenage life, 1.) That first big break up, and 2.) the miserable feeling of being a teenager. Welcome to Martin’s world: a 60 minute mind-bending monologue, that still makes me clench my teeth, or yell out, “Oh… shut up!!,” after innumerable listenings.

The tape is as confusing as it is revealing. Martin clearly has feelings for Lizben (or regarding her leaving), as is evident by his rambling, desperate pleas for remembrance, and cliché parting words, but I am not entirely convinced that Lizben feels the same. For instance, Martin’s cassette also documents the next day when Lizben is, “supposed to come over,” but stands Martin up. She does make him a tape with the help of a friend, but Martin only listens to some of it, calling it “quite boring,” and then continues making his own tape. I’m not sure how to interpret her gesture as I can’t tell if Lizben’s tape was an older one, or one recorded and delivered in substitution for her final visit.

Throughout his ramblings Martin drops several conflicting clues about their relationship. He describes Lizben and himself as “intimate lovers,” but also says that he wishes he “could have gotten to know her better.” He makes mention of their “first kiss,” but also says that he “never thinks of [her] in a lustful, or sexual way.” What the hell? Martin enjoys using his imagination, hence the detailed recounting of dreams he supposedly has, and it is easy to suspect that he is exaggerating the extent of their involvement.

Martin’s tone changes noticeably halfway through (as I assume he gave the first part a listen) and seems to be compensating for the gloomy introduction by playing Greensleeves and telling a few jokes. This mindset deteriorates however when he delves deeper into his sexual dreams. He ends his tape (nearly in tears) with the song "Three Times a Lady" by Lionel Richie. His voice unexpectedly enters during the final musical interlude to say “please remember me… please remember me. Cause I’ll always remember you.” Even after this he continues to rephrase (although mostly repeat) his previous thoughts before filling the remainder of the tape with music.

Martin’s tape falls short in one way: It lacks a true arc. Martin remains the same character from beginning to end, making no realizations, and coming to no real conclusions. "Band Nerd Love" is still an amazing artifact from the life of an American teenager of the 1980’s, steeped in the type of egoism, self-loathing, and suffering that typifies teenage existence. I can’t help wondering what Martin (probably in his 50's now) would think of his tape. I would also like to know what you, the reader/listener, think of it. Drop me a line...

-Cassette home recording found at a thrift store in Las Vegas, NV in 2006