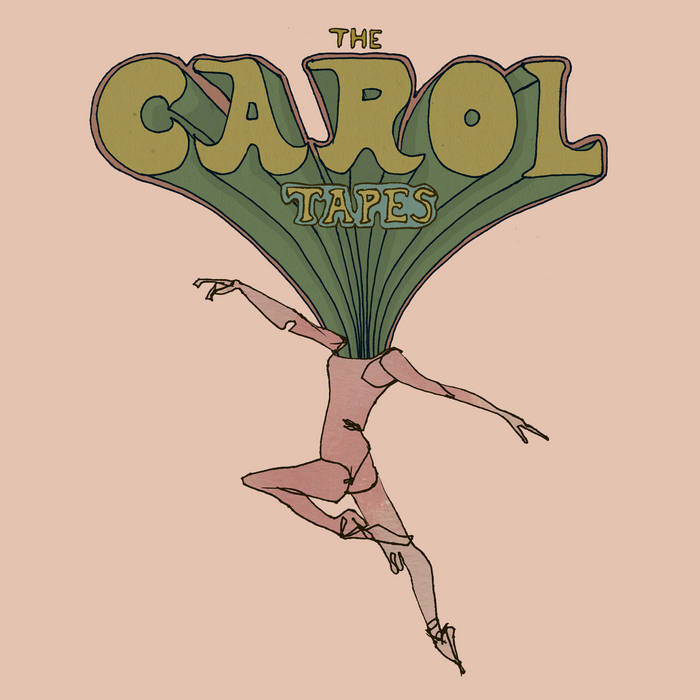 I’d like to introduce you to someone I don’t really know. Her name is Carol.

She’s amazingly crude, care-free, self-depreciating, and brutally honest. She’s on an emotional roller coaster— with stretches of starvation and diet pills, followed by epic food binges at Jack in the Box, and “all over town…” As she says “I’m a compulsive eater, all my life maybe, that’s what I’ve been trained to be.” Her self obsession generates wonderful quotes, which will stick with you, as she says “I just look so bloody great, and I’m not being seen by any decent people and shit”. On top of it all, she has a love/hate relationship with Mick Jagger… and these are her tapes.

Carol’s recordings come from four home-recorded cassette tapes that I bought from a thrift store called Armstrong’s Emporium in Las Vegas, Nevada, around 2003. I was actively engaged in that type of thing then, having stumbled on a home-recorded cassette a few years earlier, and spent the next several years hunting for more. Every few weeks I’d try another thrift store, sitting down with a pile of possibly home-recorded tapes to do a quick test-listen with my Sony Walkman. I would purchase any tapes that sounded promising and then listen in turn on the cassette deck in my old 1990 Ford Taurus Sedan. It was clear from the start that Carol’s recordings were special.

If some “found sounds” are fragments, akin to finding a single bone at an archeological site, then Carol’s tapes were more like an intact skeleton— frozen in the throws of some tragic death— with all but the head available for analysis. As I said, I don’t know who Carol is, but I know she was an art student of some type in the Winter of 1976. Her audio recordings seem to serve as an audio diary, possibly as part of her involvement in Overeaters Anonymous, Alcoholics Anonymous, or both. I was immediately captivated (and confused) by her voice, as it sounds like that of a much older woman, “just so lazy man, and laid back…” as she says, and then amazed by the cinematic arc of her recordings and her consistency overall.

She is consistently crude and negative, but also consistent in her thankfulness (mostly to God) or for the good luck that befalls her. She is consistent in her search for a meaningful relationship and in her love/hate relationship with Mick Jagger. She is consistent with her hunt for employment and her attendance and commitment to Overeaters Anonymous. She’s consistently blunt, especially in her descriptions of herself and her insight into her addiction to food. I assume her to be about 20 years of age (though she could be much older…)— and so her struggles to understand herself, and to be happy, to find her footing in the world— are befitting of someone of that age, but exceptional in that they are documented in this way.

I didn’t expect a recording made 43 years ago, to be this much of a pop culture gold mine. With references to retailers like Penny’s, The Gap, and Tower Records, and fast food restaurants like Winchell’s Donut House, McDonald’s, and Jack in the Box, but also everyday items like Diet 7Up, Levi’s, and string cheese. Mick Jagger is featured prominently, but Bob Dylan also makes an appearance as well… Let me say, that I still find it surprising that The Gap and Jack in the Box co-existed in 1976…

Ultimately, the most enduring aspect of her tapes are their natural cinematic arc… Her found recordings begin on December 1st, 1976, in which she quickly sets the scene and brings us up to speed on her day to day life in which she’s running to various classes, checking out the “coffee house scene,” and dropping by Jay’s Market. Then she introduces some characters… Her friends from school and the multiple men in her life. There is Doug, a young man who works at Jay’s Market (“I definitely don’t think he’s gay, I definitely felt that he liked me”), a man named Frank who she is dating, and also seems to know from school (“I don’t know why I’m so hung up on him, like in my dreams n’ shit?”). She later mentions an affair with Kurt, and of course, there’s always Mick (Jagger).

By the Summer of 1977, conflict sets in. Her found recordings begin again on July 30th, and it is clear that the stressors in her life have begun to mount. Addressing God, staring at the full moon, she says “I have a long list of resentments, which I have to share with you. I have no where else to turn.” Carol then details the events of the previous four days,— including a massive food binge— continued difficulty finding work, faltering-support from Overeaters and, difficulty finding pants for a child (a nephew perhaps?) named Sudden, all while being slighted by Bob Dylan. “What can I do? I’m hopeless, powerless. That’s what I’ve learned in two years, that I’m powerless over people, places, things… especially food. What a warped mind…” Even though Carol is self-aware to some degree, as she says “I know that I’m seeing this whole thing from a much more emotional and distorted point of view…” she ultimately is dragged down by her depression and resentments, reaching her lowest point that evening with little hope for escape or recovery.

It is at this point that things take an incredible turn… a glimmer of hope, or a suggestion of a happy ending when Carol checks in a month later (on Mick Jagger’s birthday!!) to give us a hint that things are looking up. “I’ve been playing house wife,” she says, “and it’s been the best month I’ve had in a long time.” A small selection of Carol’s audio was featured on my found sound release from 2007, Eavesdrop: a wealth of found sound, but this is the first time that her complete recordings have been available— on cassette, with bonus tracks as well— and it’s about time. I feel like I’ve known Carol for 15 years, and so it’s a great pleasure to finally introduce her to you, and to bring the absurd tragedy of her recordings to light.

The “bonus tracks” contained here are some of Carol’s a cappella songs, which constitute another cassette entirely. I think that this is the “creative project” which she sent to Bob Dylan which she “believed” would “get to him.” As interesting as I find her songs, I can understand why Dylan did not write her back, if he did in fact ever hear them…

The entire content of "The Carol Tapes" is composed of found audio from cassette recordings that were donated to charity, lost, or abandoned. I am releasing the cassette version of this album in the spirit of a "Creative Commons Attribution 4.0 International License," meaning I encourage anyone to make alterations to this work or use it for other commercial purposes as they see fit. However, this should be done with the understanding that anyone using this work does not have true ownership rights to the source material, and should credit Carol as the author of this material.

Similarly, The Carol Tapes are being released digitally under a Bandcamp "Attribution License" meaning you can repurpose, remix, and reuse the audio contents as you like, as long as you credit Carol as the creator of the audio.

Special thanks to Tom Miller for creating the album art and his careful visual treatment of her story and to Brian Garth for helping to get the audio into shape for release. Thanks also to my brother Jesse Smigel for his vision, Brittany Cole Houston for transcribing Carol’s recordings, and to artist Nicky Watts for portraying her. All sales from “The Carol Tapes” will be donated to Overeaters Anonymous in Carol’s honor.